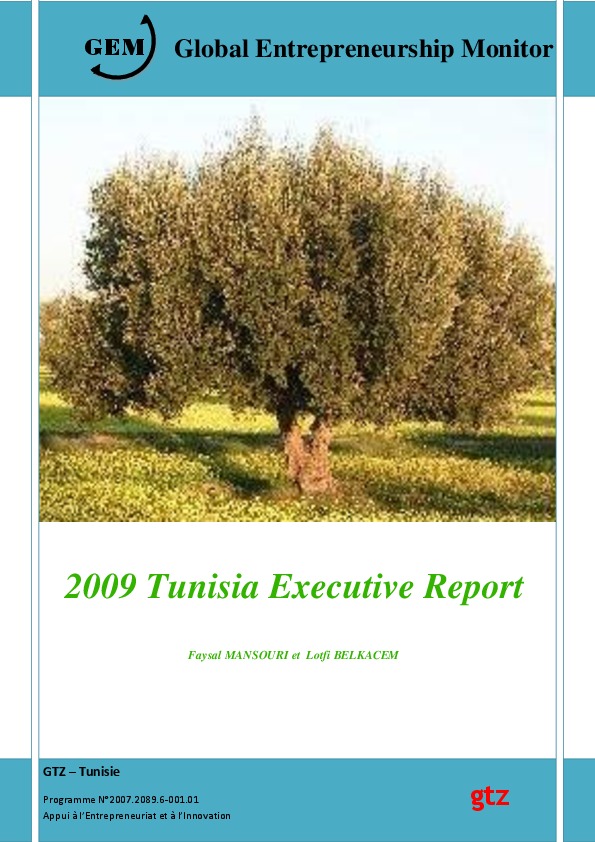 This is the first participation of Tunisia in GEM activities. Early-stage entrepreneurial activity in Tunisia measures 9.4%; comprising 2.2% nascent entrepreneurship and 7.2% new firm entrepreneurship. The established business ownership rate measures 10.2%. Entrepreneurial activity is driven more by opportunity rather than necessity with 77.7% of entrepreneurial activity being motivated by opportunity and only 23.3% is driven by necessity. Male entrepreneurial activity is about three times higher (at 73.0%) than that of females (at 27.0%) and the results show that 71.1% of male entrepreneurs are driven by opportunity while this rate is about 66.5% for female entrepreneurs.
The survey reveals that 57.6% of Tunisians expects to start a new business within the next three years. We also find that 51.4% of individuals involved in entrepreneurial activity for an opportunity motive are mainly interested in increasing personal income, while 11.6% are mostly concerned with greater independence. At the same time, 22.3% who pursued non-opportunity motives were driven by a desire to maintain personal income. In term of growth aspirations, results show that 7% of all early-stage business entities are expecting 10 or more jobs 5 years after the business have started. Among individuals involved in entrepreneurship activity 61.3% expect to create between 1 and 5 jobs, while 19.4% expect to create between 6 and 19 jobs and only 11.8% have expectations of more than 20 jobs.
Experts believe that the Tunisian government has made entrepreneurial developments a national priority. Indeed, several acts of legislation, economic incentives and governmental programs and institutions have been established in order to boost business creation, in particular by university graduates. Entrepreneurial education is being introduced and reinforced within the higher education system in order to develop a nationwide entrepreneurial culture and prepare the emergence of new generations of entrepreneurs. Tunisia has managed to avoid direct hit by the recent financial turmoil. This is due to a prudent financial and economic policy and to partial openness of the Tunisian stock market to foreign investors and to foreign assets. Nevertheless, exporting firms have been affected and to some degree by the economic repercussions of the financial crisis. Experts attribute this exposure to the relative dependence of these activities to the European markets.
In order to hold down the impacts of world economic crisis, decision makers in Tunisia have adopted a comprehensive set of policy measures that includes the creation of a strategic investment fund (1% of GDP), boost the infrastructure programs, set up credit lines destined to support financial restructuring of key business operators as well as more strict regulation on bank placements. Official statistics show an increase of 12.7% for declared investment in Industry during the first 9 months of 2009, while declared investment in services sector has increased about 16.5% during the same period. In terms of growing businesses, difficulties are felt more strongly by nascent firms, while established ones are doing better. Indeed, only 17% of early-stage entrepreneurs and 31% of established entrepreneurs believe that growing a business now is more difficult than one year ago due to crisis repercussions. These low figures tend to confirm that the world economic turmoil did not have severe incidence on young business development. Nevertheless, 47.6% of early stage entrepreneurs find some difficulties in starting a business as a result of the economic crisis.